Kate Middleton turned 41 yesterday, but any celebration of the Princess of Wales was overshadowed by news coverage of her brother-in-law Prince Harry’s memoir Spare, officially out today, and what he shared about Kate’s coldness to his wife Meghan Markle.

Page Six ran a report on Kate’s birthday about her pain over the book. The Princess is “outraged and hurt [by Harry’s claims about her in Spare],” Tom Bower, author of Revenge: Meghan, Harry and the War Between the Windsors, told the outlet.

His comments echo what a source told Us Weekly on January 8, the day before Kate’s big day: “Kate feels that Harry’s actions are atrocious,” the source said. “She is appalled at him for dragging her name through the dirt and is finding it hard to forgive.”

The Princess of Wales was not photographed out publicly on her birthday, and Hello! reported that she and William seemed to celebrate her day in private with their children Prince George, Princess Charlotte, and Prince Louis. “The pair are likely to have enjoyed some family time together with their three children on the Princess’ special day,” the outlet shared. 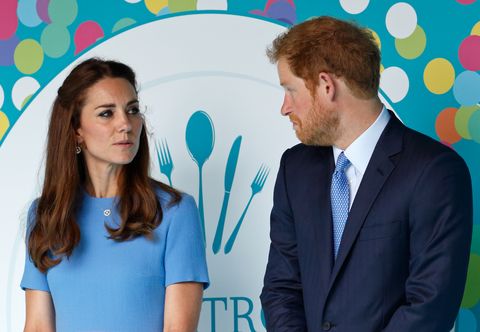 Kate Middleton and Prince Harry in June 2016, a month before Harry would meet Meghan Markle.

Kate’s birthday was publicly acknowledged by King Charles III on the royal family’s social media accounts. His team shared well wishes to her and continued their business-as-usual, ignore-Harry-and-Meghan-publicly approach.

The royals have yet to comment on either Harry’s memoir or his and Meghan’s Netflix docuseries. As Harry put it in his Anderson Cooper 60 Minutes interview, the family may have a public “never complain, never explain” policy, but in private, their communication teams use “royal sources” to brief reporters and get the narratives they want published, particularly in the British tabloids.

That practice that can be seen above in Us Weekly’s report about Kate’s alleged anger over Harry’s book; Kate has been publicly silent, but multiple sources have discussed her feelings about the memoir to both British and U.S. outlets.

Harry told Cooper he has never briefed media against his family, and that’s in part why he has decided to tell all directly, in his own words and writing.

“So now, trying to speak a language that perhaps they understand, I will sit here and speak truth to you with the words that come out of my mouth, rather than using someone else, an unnamed source, to feed in lies or a narrative to a tabloid media that literally radicalizes its readers to then potentially cause harm to my family, my wife, my kids,” Harry said.