On Friday, Priyanka Chopra was channeling Belle’s ballroom gown as she walked the red carpet at the Women in Cinema event. The night took place during the Red Sea International Film Festival, which was held in in Jeddah, Saudi Arabia. Her dress was in a rich gold satin with a matching coat that swept down to the floor and trailed behind her.

The ruched bodice hugged her figure, and she wore a beaded necklace, with open ends formed into star shapes. Orange charms on the piece matched the satin. She had in diamond earrings and a jeweled watch on her wrist. 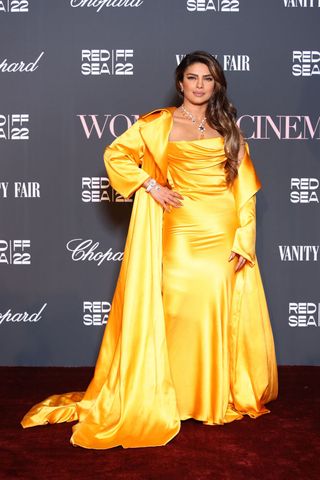 Chopra matched her makeup to the glam look, wearing her long brunette hair down in smooth waves, black winged eyeliner, and a dark pink lip. 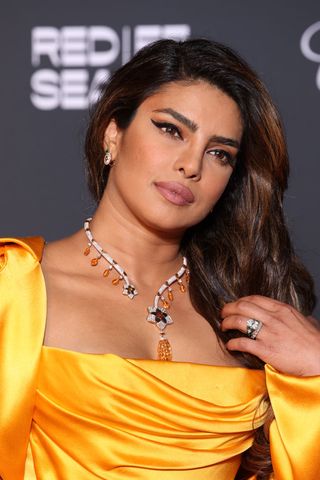 It’s All Coming Back to Me

Chopra is appearing in a new movie, , set to release in 2023. The film is about a woman who sends texts to the old cell phone number of her late fiancé, wanting to remain connected to him after his passing. When the number is reassigned to a new man, she finds herself falling for him as they start communicating.

The Red Sea International Film Festival is a big deal for anyone in the entertainment industry, especially while promoting a film. It takes place over ten days and feature 131 films from 61 countries. Many of these movies are making their world premiere, and this year, director and writer Oliver Stone is the head of the jury for the festival’s Red Sea Competition.

Chopra just celebrated her fourth wedding anniversary to her husband Nick Jonas. On December 1, Chopra’s best friend, Tamanna Dutt, shared a sweet pic on her Instagram Stories of the couple embracing as they watching fireworks go off on the beach, a photo that was likely taken for Chopra’s last birthday.