Helen Park remembers the summer she fell in love with musical theater. She was participating in a two-month program at a Virginia elementary school, living with an aunt while 7,000 miles away from her hometown of Busan, South Korea. She played the Minstrel in Once Upon a Mattress and became obsessed while “memorizing the whole score, singing it front to back and imagining [herself] as every character.” Apparently, there’s an old picture somewhere of adolescent Park and her fellow Mattress-mates. In it, she is the only one sobbing. The end of summer signified more than just a return to school; it was a return to home in Korea. And she spent the plane ride thinking, “How can I get back there? How can I be on Broadway?”

Park is doing her childhood dreams one better. Not only is her original musical KPOP opening on Broadway this month, but the story also centers on Park’s other lifelong passion: Korean pop music. Park—who has lived in many cities in Korea, Canada, and the United States—calls this electric and über-popular genre of music her true home. The premiere of KPOP will shatter Broadway’s embarrassingly long record of never having a musical by an Asian-American female composer. Park will be the first.

It’s not KPOP’s first time in New York, however. The initial Off-Broadway production received a sold-out, extended run at Ars Nova and was the most nominated show of the 2017-2018 theatrical season. The years since then have been even better to Korean popular culture, with K-pop “idols,” Korean dramas and series, and even beauty products amassing extreme popularity. Sensational performers like Blackpink, BTS, and Twice have galvanized passionate fans from every corner of the globe. In Park’s KPOP, real-life singer Luna—of f(x) fame—stars as MwE (pronounced m-wee), one of the many acts putting everything on the line for a one-night-only concert. MwE has big dreams but an even bigger secret that threatens one of the industry’s hottest labels. It’s a story that both criticizes the ills of the K-pop-producing machine and humanizes the talents that make it work.

Even in the midst of a busy preview performance schedule, Helen Park carved out time to speak to ELLE.com about the reward of taking risks, working with her childhood favs, and the weight of being a “first.”

How have the early audiences been reacting to KPOP during previews?

I see the show every night and there is just such a variety! Of course, there are K-pop fans who are just curious to know how the genre works on a Broadway stage. They are there with light sticks, they buy merch and it’s so fun to watch. Actual K-pop fans seem to enjoy and appreciate it, so that is the most gratifying. But then I also see people who are very obviously from the Broadway community, and they are watching another musical; this one just happens to be called KPOP. I see their responses are a little confused, but they are experiencing something new which is also interesting to observe. The Circle in the Square Theatre is in a round, so it’s like the audience is part of the show. I hope everyone feels invited and like they can get as involved as they want to in the story. That’s the goal.

Musical theater and K-pop are industries that inspire millions of people, especially young folks. But why merge these mega worlds in a story like this?

I fell in love with musical theater as a kid and there were some Asian-centric shows, but even back then I knew they were sparse. At first, I thought “Oh, maybe I can become an actress,” because that’s the only area in the arts where I saw myself represented. It never occurred to me that someone who looks like I do can write the shows. I would do research on the great musicals and all of the composers seemed to be old white or Jewish men. I actually first went to college as a pre-med student. 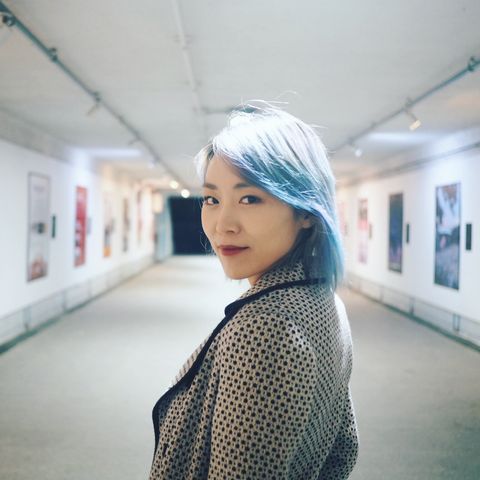 The pre-med to theater pipeline is actually so powerful.

I didn’t even dream about this job! But I had always loved music and thought I could do it as a hobby. But then during third year, I decided that I needed to take a risk and try doing what I love without being too calculative about the probability of “making it.”

What happened after the leap of faith?

I went to my parents and I said, “I need to do this.” I enrolled in NYU’s Graduate Musical Theater Writing Program. Mind you, by the time I got there I had already written a lot of K-pop music. I was also teaching myself how to produce, write songs, and actually create a decent demo on a computer. But I studied musical theater writing, still never imagining there was a place for me on Broadway. It was a boys club. Of course, there are many amazing women composers, but at that time I didn’t see many [composers] of color. I wasn’t sure where any of this was going, but it all came together when KPOP entered my life. Ars Nova was planning on doing a show set in the world and was looking for someone to write the score; they heard about me through word of mouth and since then, I’ve been able to combine the two great loves of my life.

What do you think people get wrong about K-pop?

Back in 2014 when I started working on this, people did not associate Korea with its music culture. In fact, the most popular question I would get asked is, “Are you from North or South?” I heard that all the time. But today there are idols, K dramas, and movies like Parasite to talk about. It’s great, but I was so weirded out by that because K-pop has always just been my popular music. I was so proud of it but felt like Americans saw K-pop as Psy’s “Gangnam Style,” cutesy girl groups, or pretty boys. There was a very apparent generalization of the genre and consequently, the culture. I was determined to change that. I was nervous, of course, but there was a choice to be made. Either I give people the stereotypes and exoticism they expect, or I’m authentic. 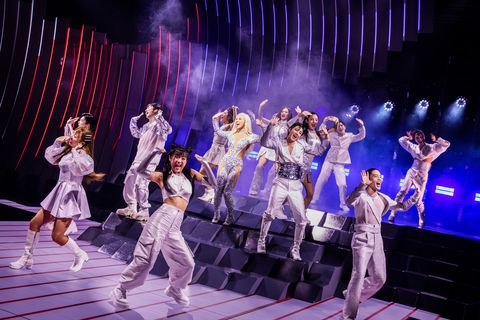 The cast of KPOP on Broadway.

First of all, I want you to know that you did K-pop more than proud. Not just because of the awards, but because of the love so many have for this show. What do you think is accounting for this shift in perception about Korean art and culture?

From my perspective, nothing changed except the reach. The K-dramas that people can watch on the Internet now and become obsessed with are not too different from what I grew up with. Korean people are very emotional. We have this word, “Han,” which is a profound feeling, like all of the heightened sensations living within us. Historically, Korea is the most invaded country in Asia. We are a small nation next to very big, powerful ones. The heartbreak of war and the split between North and South lingers. There is the reality of a broken country and the yearning for peace and unity. Big emotions are embedded in Koreans, so our art is raw and expressive and ultimately, relatable to a lot of global citizens desperate for something better.

There’s a universality in the specificity.

Yes. When art gets into a specific feeling of the human experience, it can speak to any audience. In K-pop, a lot of the music is bilingual, right? The songs in our show are also bilingual. But what I found is that music is not just the words. The melody is also saying something. The harmony and choreography, they are saying something. Combined with lyrics, it’s all communicating a story from the perspective of a character.

Is that your favorite part of the job?

Ironically, because I speak English and Korean, I actually feel like every day I struggle more with both of them. The language I’m most fluent in is music; that’s why I love it so much.

Let’s talk about the star-studded cast that’ll be singing your music. Has it been a dream to work with real K-pop artists?

Oh my gosh, yeah! Especially now, I think everyone is acknowledging the importance of authenticity. We were actively looking for talents from that world. Luna is a queen and plays our main character, MwE. I remember watching her when she debuted on TV. I was already following SM Entertainment [the agency Luna was first recruited by in the late aughts] and when they announced a new girl group, I had to watch that moment. My sister and I sat in front of the TV and fell in love with f(x). Min from Miss A is also in our show. She was the girl JYP Entertainment set to be the next big thing, she was actually training in New York to become a global star. Kevin Woo was in U-KISS and then BoHyung is one half of KEEMBO. I didn’t even realize she was already so famous. She’s probably one of the best singers in the K-pop idol world. Obviously, I have been starstruck. But the more I get to know them, I simply see how hardworking they are. All of our cast members are wonderful humans and even though I feel the need to represent my culture well, now that responsibility is shared. It’s more of a mission and something I take pride in. 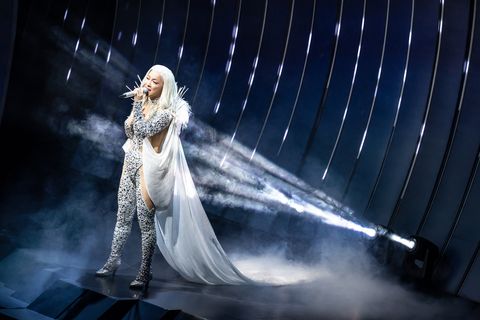 A lot will be made about the fact that you’re the first Asian American female composer on Broadway. What is your take on being the first? There’s the pride you mentioned, yes, but I imagine it’s a complicated label.

Honestly, it is mind-boggling because I know so many talented Asian composers, Rona Siddiqui for example. What I am happy about is that this is a position I couldn’t dare to dream up. To think that someone will see me and know that there is a place for them is everything. In the coming years, there will be more Asian, especially female Asian, composers represented. I mean, we are the most populated race in the world yet we are so generalized. People expect one thing from this vastly diverse community. At one point in the show, we have this ballad that is just piano and voice—it’s a tribute to the kind of music I used to listen to when I was missing home. It’s emotionally raw in a different way than people expect of energetic, dance-y idol music. K-pop, like the people it comes from, isn’t one thing; there is a variety of grooves. And that’s what I hope people discover.

This interview has been edited and condensed for clarity.

Brittani Samuel (she/her) is a Caribbean-American arts journalist and theatre critic. Her work has appeared in Glamour, Observer, Vice, and several other places on the Internet. To read more of her published work, visit BrittaniSamuel.com or follow along on Instagram @brittaniidiannee.