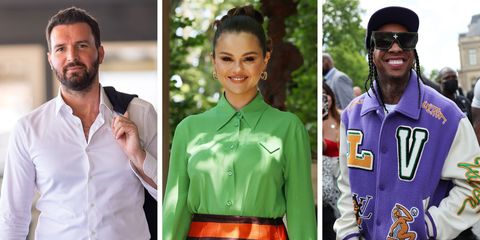 Selena Gomez, who’s been publicly single for years, herself knows and has addressed how her just being photographed with a costar or guy friend is enough to stir up dating rumors. In the last month, it’s happened twice to her, with some outlets speculating she may be dating Andrea Iervolino due to photos of them being close on her Italian vacation surfacing or Tyga because they partied together late this week. Now, sources close to Gomez have weighed in on her real relationship status with both men.

TMZ sparked the Tyga dating buzz yesterday when it reported that that Gomez and Kylie Jenner’s ex-boyfriend Tyga were seen leaving the Nice Guy in West Hollywood on Wednesday morning around 2:30 A.M.

They left through different exits, Gomez using a backdoor and Tyga going through the front. Multiple sources told TMZ that Gomez arrived at the Nice Guy just before midnight, while Tyga was already there. The outlet then inserted romance speculation, writing, “It’s unclear what, if anything, is happening between Selena and Tyga … but the pairing is interesting. We haven’t known Selena to date anyone publicly in a long time.”

Later, TMZ updated its piece after getting intel from a source close to Gomez. The outlet wrote it was informed by the source that “the two aren’t dating, they were there separately to see different people, and their groups ended up hanging out together inside.”

Us Weekly, meanwhile, reported yesterday that Gomez is not romantically involved with Andrea Iervolino, who she was photographed being cozy with while in Italy with friends earlier this month. “Selena and Andrea are just friends,” the source said. “She’s dating and is keeping her options open with a few guys.”

“She’s really happy and is perfectly okay with being single,” the source added. “She’s surrounded by best friends who are her biggest support system.”

Entertainment Tonight reported on Gomez’s 30th birthday in late July that Gomez is officially single, and her primary focus is herself. “Selena isn’t dating anyone specific at this time,” the source said. “She is more open to love, but she is also very much focused on herself and her work right now. She’s in a very healthy place. She is feeling fantastic and very mentally, physically and emotionally healthy.”

The source also shared what traits she looks for in men she dates: “When she is ready for a true partner, she wants someone who is trustworthy, respectful, honest—with themselves and to others, real, supportive, accepting, nice, thoughtful, funny and someone that’s not in it for the fame or attention,” the source said.

The 10 Fashion Trends You Need to Know About (and Shop) This Winter
Rachel Zegler Says She Had a Breast-Cancer Scare When She Was 19
Shelf Life: Yiyun Li
Fashion Show – Balenciaga: Fall 2011 Ready-to-Wear
Harry Styles’ Brand Just Launched Makeup Products