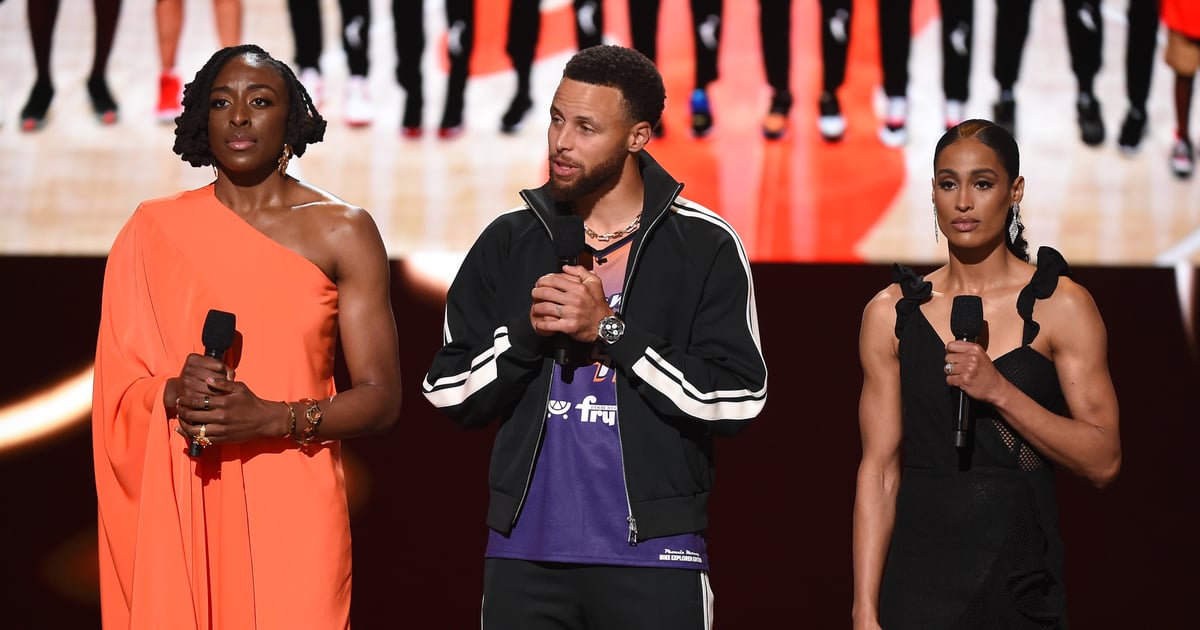 Brittney Griner was recognized at the 2022 ESPYs in ways both planned and spontaneous. The award show was held in Los Angeles on July 20 and included several mentions of the detained basketball player. One dedicated segment was led by Stephen Curry, who was the evening’s host, with Los Angeles Sparks player Nneka Ogwumike and Skylar Diggins-Smith, who is Griner’s teammate on the Phoenix Mercury.

Amid festivities and acceptance speeches, Curry appeared on stage to announce the WNBA as the sports humanitarian league of the year. “We are thrilled to have Nneka Ogwumike and Skylar Diggins-Smith among the WNBA stars here tonight, but we also need to acknowledge one who isn’t here. Her name is right here on this jersey,” Curry said while wearing a Mercury jersey with Griner’s number, 42.

“The more we say her name, the louder our voices will be.”

Ogwumike joined in, listing Griner’s career highlights and accomplishments, including her championship finals win in 2014 and her two Olympic gold medals. Above all, however, Ogwumike described Griner as a “human being whose predicament commands our attention.” Diggins-Smith added, “It’s been 153 nights now that BG has been wrongfully detained thousands of miles aways from home — away from her family, away from her friends, away from her team. All throughout that time, we’ve kept her in our thoughts and in our hearts, even though we know that ain’t nearly enough to bring her home.”

Curry, Diggins-Smith, and Ogwumike ended the segment by urging the global sports community to continue raising awareness and calling for Griner’s peaceful return to the United States. “The more we say her name, the louder our voices will be,” Ogwumike said. Diggins-Smith added, “The more we see her face, the closer we’ll feel to her, and her to us.” Then, in unison, the three athletes said, “We are BG.”

Megan Rapinoe also brought attention to Griner’s detainment. While accepting the award for best play, the soccer player for the OL Reign and US Women’s National Team said the evening reminded her about the impact and “collective power” of the sports community. “BG deserves to be free. She’s being held as a political prisoner,” she said. “I don’t think I’m getting political, but I do love to get political.”

Like the athletes who spoke before her, Rapinoe urged attendees to continue putting pressure on world leaders by speaking out in public and on social media: “It lets BG know, above everything, that we love her, we miss her, we’re thinking about her all the time, and we’re doing every single that we can to get her out.” She added, “What are we doing here dressed up like we are when our sister is detained abroad?” Rapinoe ended her speech by saying, “We haven’t done enough, none of us. We can do more. We can support her more and let her know that we love her so much.”

Griner was previously honored at the WNBA All-Star Game in Chicago on July 10. The basketball court featured a “BG42” decal, and players wore jerseys with Griner’s name and number after returning from halftime. Additionally, the game’s MVP, Las Vegas Aces player Kelsey Plum, dedicated her trophy to Griner.

Griner was arrested at a Moscow airport on Feb. 17 after officials allegedly found hash-oil vape cartridges in her luggage. (Griner was in Russia playing for the UMMC Ekaterinburg, as she had done for several off-seasons.) Her detention was extended several times until her trial began on July 1. Griner pled guilty to the drug charges, which could result in a 10-year prison sentence. At a July 7 hearing, Griner stated her guilty plea and said, “But there was no intent. I didn’t want to break the law.”