Taken literally, heritage in menswear never really goes away. Unless you’re sporting the latest wearable art installation (we sincerely hope that you’re not) the chances are that you’ve got on something time-tested which has, in one form or other, populated the wardrobes of our forebears.

In men’s fashion-speak, heritage is anything that has more than a whiff of the old-school Britishness about it. Think Prince Charles, think Peaky Blinders, think your grandad popping out for milk in his flat cap and wax jacket. In millennial terms, if it feels “completely ancient” there’s a good chance it hits the heritage menswear bullseye.

Because it’s literally been around for decades, this look is, for the most part, safe and stylish ground, especially in the autumn when tactile fabrics come into their own. Brands like Barbour or Private White V.C., who have never really stopped making heritage menswear, keep it fresh with contemporary pieces lining up alongside tried-and-tested designs.

But there are rules to follow because heritage can go horribly, horribly wrong in its application. On the one hand, there’s the danger of looking like a UKIP party candidate waiting for the ‘good old days’ to come back. On the other, you could be mistaken for one of your grandad’s pals – albeit with a much better grooming regime.

To help you avoid heritage hell, we’ve delved back into the archives to uncover the pieces which make you look distinguished and not like you’re going on a quail hunt. Old is the new new.

We’re going to come out and say it, coats make the cold and soggy months completely worth it. If you’re a one-outerwear-piece-per-winter kind of guy, this year make sure that a heritage-inspired wool overcoat is at the very top of your shopping list.

Heavy winter coats offer benefits on every front, says Reiss head of menswear design Alex Field. “Heritage wool coats are obviously warm and practical in the cold months, but they also add some life and texture to an outfit when you choose a weave such as herringbone or houndstooth.” And, even more helpfully, they play nice when layered: “I think they’re at their best oversized and worn over a layered outfit; whether that be with an interesting knit or scarf,” says Field.

Physical beauty aside, the versatility of heritage wool overcoats is pretty damn attractive too. A grey herringbone design will look the business over a navy suit for, well, business. And on the weekend it’ll make the perfect match for chunky crew neck sweaters, jeans and Chelsea boots. We think it was Prince Charles himself who said that with the right heritage coat, it’s practically impossible to look anything less than “maximum swag”. 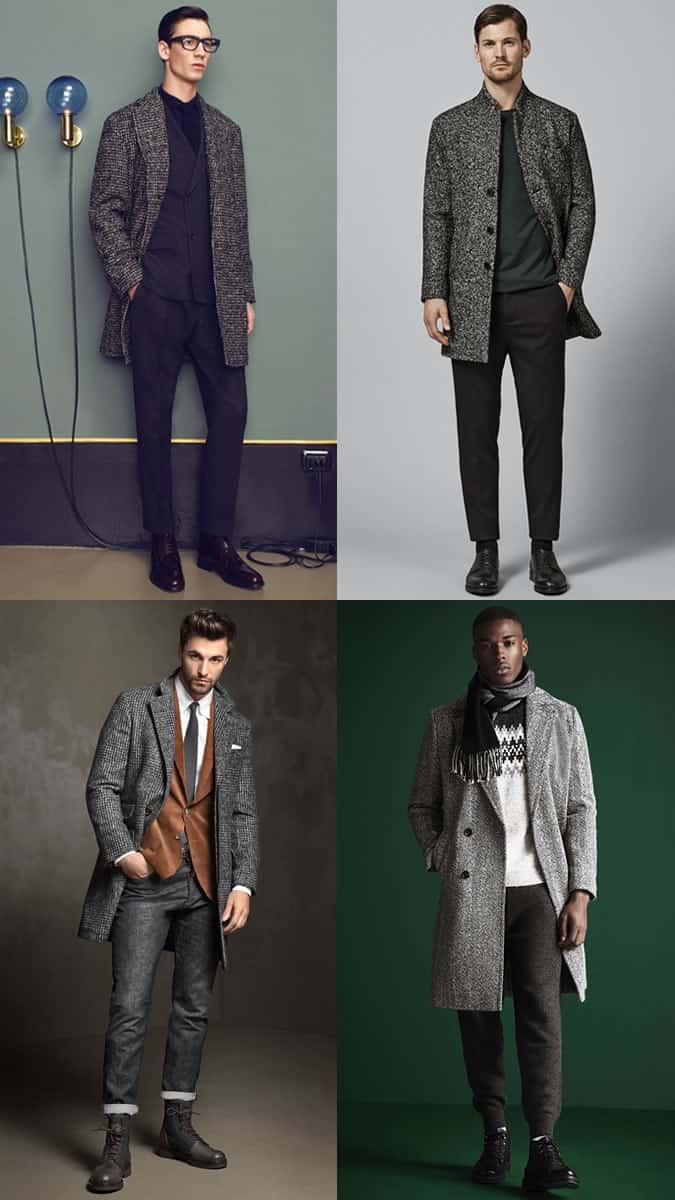 Field explains the appeal: “Baker boy hats and flat caps are back on trend this winter and my guess is Cillian Murphy’s character Thomas Shelby in Peaky Blinders has more than a little to do with it.” The fact that these heritage hats are fence sitters is all part of their charm. “More sartorial than a baseball cap, yet less formal than a trilby, flat caps and baker boy hats work well at the weekends as part of the rugged, outdoorsy look,” Field says.

The key wearing a heritage hat is making sure yours isn’t teamed with other heritage pieces or overly formal garms. Leave the flat cap and wax jacket combo to the landed gentry and instead try wearing your historic headwear with some slim chinos, trainers, a T-shirt and a bomber jacket. If a heritage hat is heading up your look, it pays to keep the rest of it casual. Knackered old trainers are great for keeping comfortable, but for maximum winter style points heritage foot housers are where it’s at. Don’t dig out your mud-splattered old wellies just yet though, jodhpur and Chelsea boots are this year’s coolest heritage kicks and have the ability to instantly take your cold-weather style up a few notches.

“The Chelsea boot is a pinnacle piece in the heritage trend,” says Giles Farnham, head of River Island’s Style Studio. “To re-purpose this classic and give it a contemporary spin, wear with raw denim jeans – rolled up to the top of the boot, and pair with a zip-up sports top, layered with a long-line herringbone or camel coat.”

What’s the freshest way to wear equestrian-inspired Jodphur boots? Clue: it’s not with riding gear. A sand suede pair worn with black jeans, a cream knit and a shearling coat gives you textured perfection. While an oxblood leather pair will look suitably slick teamed with a black suit and a grey roll neck for the office. 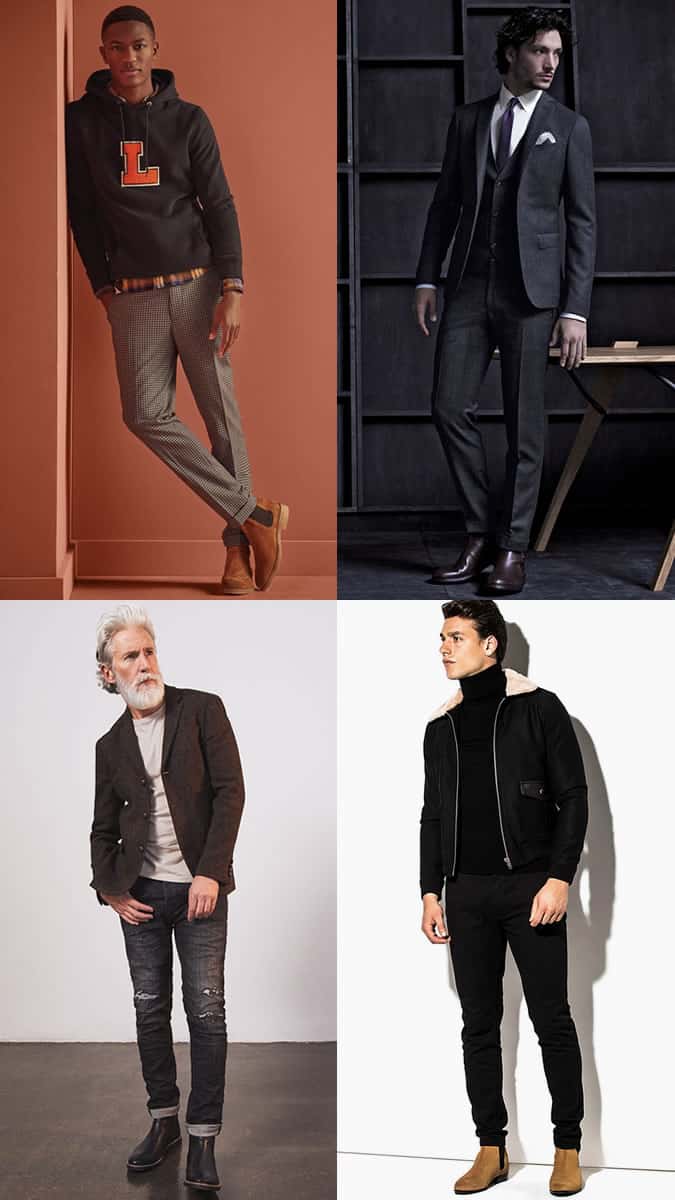 Innovation in menswear is great and all but sometimes the classics are hard to beat. Exhibit A is the suit, which can be nipped, tucked and tinkered with but is rarely improved as a result. This season we’re swerving skinny suits and getting all nostalgic for old-school wool tailoring.

Unfortunately, a wool suit has the unparalleled ability to get a bit University Challenge if it’s not approached with the right amount of know-how. So knock boffin vibes on the head by taking the advice of Savile Row tailors Thom Whiddett and Luke Sweeney, who recommend giving traditional suiting a remix. “A two-tone herringbone wool blazer is the perfect staple piece for winter. A biscuit colour will sit harmoniously alongside navy and blue while also complementing softer tones such as whites and greys. We recommend dressing a blazer down with a pair of casual fitted trousers and either a shirt or polo to maintain a more tailored top-half.”

If you want to go full heritage (think herringbone, houndstooth or chalk stripe designs) pay close attention to your suit’s cut. If it’s on the bigger side, you’ll give Jeremy Corbyn a run for his money in the charity shop dressing stakes. Keep your suit on the slimmer side of things and throw on some sneakers and a sweatshirt for a modern finish. When it comes to bag trends, we’re big fans of function and fashion working together for the greater good of menswear, so the satchel gets two stupidly enthusiastic thumbs up from us. There’s also the added bonus of doing your bit for your fellow man by not being one of those people whose backpack constitutes another person on the commute. Seriously, dude, take it off.

Andrew Fei, men’s accessories buyer at John Lewis is a fan of the satchel’s practical charms too. “Messenger bags and satchel bags hold your work papers and can comfortably carry your trainers/sports gear, ultimately helping keep your hands free,” he says.

Satchels may all be sensible and functional, but not all satchels are created equal, looks-wise. “I’d recommend a brown bag for the man who can dress down to work, whereas a slick, black briefcase-style satchel is ideal for those who are suited and booted from nine-to-five,” says Fei.

Anything which wouldn’t look out of place on the school run gets a no from us. Ditto embossed initialling and faux beaten up versions which are ideal for your teenage sister, not so much for you. As fabrics go, corduroy is underrated. It not only looks good, but it feels good and is hardwearing too – the holy trinity of menswear. But after being adopted by those in cerebral professions (and tragically, Jeremy Clarkson) it’s a pretty hard sell for most men.

Killing it in corduroy is all about unpredictability, a fact not lost on The Cords & Co, a brand which has dedicated itself to the tough stuff. Design director Linnéa Bach Gärde explains the new-found look of an old favourite: “In our debut collection the silhouette of corduroy is simple and classic but references utilitarian and military wear. The signature pieces are the reinvented iconic garments such as the biker jacket and the fishtail parka. We’ve also taken classic jersey pieces flipped into corduroy.” It’s official then, cord has well and truly jumped out of its lane.

Luckily, the corduroy revival is happening all over the high street, meaning that getting creative with the fabric is a cinch. A cord take on a denim trucker jacket will pair perfectly with your go-to black jeans. Or if you’re feeling braver, a corduroy sweatshirt is also a strong shout. Just don’t double up – remember that the main rule of the heritage trend is that you can have too much of a good thing.