A trip to Hawkins, Indiana, in Stranger Things might be a nightmare of uncanny terror, but a journey back to the ’80s with the hit Netflix series is wall-to-wall nostalgia. In amidst the Spielberg references and throwback soundtrack, the fashion of Stranger Things is also well worth a binge-watch.

The retro costumes on-screen turned the show’s young stars into pre-teen style icons and spawned a growing number of clothing collections that have broken through to our dimension. As the next series drops, here’s a reminder of why the show’s throwback style has got us frothing at the mouth like a flesh hungry-but-fashion conscious Demogorgon.

The ’80s Have Come Back To The Future And by the future, we mean, well, now. Because ever since Stranger Things came onto Netflix in 2016 it’s been a lesson the retro power of eighties style. Some of the show’s vintage trends and timeless pieces have seemingly travelled through The Rift to influence contemporary brands and pop culture-inspired fashion, and are being re-adopted as modern style essentials.

Check out Steve’s version of the preppy ’80s jock – all slim-cut sweatshirts, excellent bomber jackets, light-wash denim and classic Ray-Ban Wayfarers. Or the kids’ goofy corduroy trousers, printed tees and colourful sweaters. It was acceptable in the ’80s, and it’s more than acceptable now. 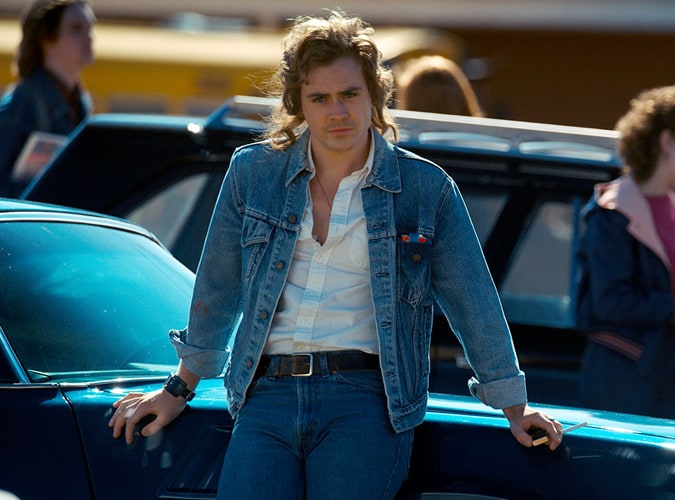 Double denim was once considered the ultimate faux pas of menswear – a naff no-no that belongs on wrinkly rockers who haven’t gotten over the past – but Stranger Things’ resident bully/pin-up Billy proved what we always suspected: double denim is badass.

It’s a bold look that drips machismo when carried off with attitude. If you can rock tight blue jeans, a matching denim jacket, worn with an unbuttoned shirt and eye-catching necklace, you’re doing something very right. Maybe leave the a greased-up mullet in an alternate reality, though.

You’re Never Too Young To Be A Style Icon For all the retro kitsch in the show, the Stranger Things kids have become a new generation of style icons. Styled impeccably off camera, the teen stars are better dressed than actors who are twice their age and seasoned red carpet-strollers.

Each has his own distinct styling ripe for the copying: Finn Wolfhard is rocking a goth and grunge-inspired look, all big hair and chic black threads; Caleb McLaughlin has mastered big colours, tough prints and flashy tailoring, sometimes all at once; Noah Schnapp does tailoring better than anyone his age ought to; and Gaten Matarazzo has doubled down on geek chic, bringing Converse, retro prom tuxes, and patterned shirts to the red carpet.

Meanwhile, the older generation – Joe Keery, Charlie Heaton and Dacre Montgromery – have emerged as some of the best-dressed 20-somethings in the game. It Works To Be All-American 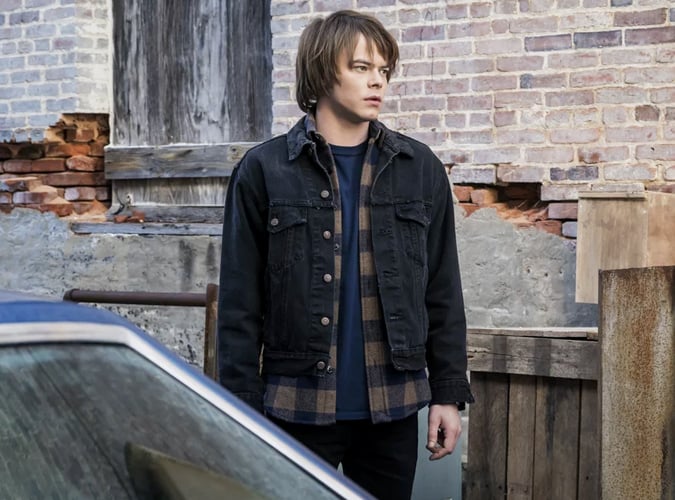 Jonathan Byers is Hawkins’s premier social outcast – kooky, quietly brooding, socially awkward, and a bit of a mystery – but always destined to get the girl and become an unlikely sex symbol. It could have something to do with his unwavering commitment to the American workwear look – channelling hometown heroes likes Bruce Springsteen, Byers’s styling is 100 per cent born in the USA and bang on trend right now.

Think heavyweight tonal layers made up from denim, plaid flannel shirts and corduroy-trim jackets – all good looking and all the mark of a man who can finish a shift doing hard labour and still have the muscle to fight off a supernatural entity. Of all the Stranger Things kids, Dustin (played by Gaten Matarazzo) is arguably the most lovable. His taste in old-school geek style is admirable and he’s certainly schooled us in the ways of how to pull it off, with retro graphic designs that have transcended the decades.

Check out his instantly iconic periodic table T-shirt, a replica of a Brontosaurus hoodie (that was subsequently put back into production by the Science Museum of Minnesota and went on to sell 18,000 units), a retro orthodontists’ shirt (“Brace yourself for the future!”), and trucker-style caps. If there’s one lesson to take from this show, it’s that the geeks shall inherit the Earth. You Can Never Have Too Much Hair Talk all you want about Steve being a high school douchebag-turned-action hero, but you’re simply be ignoring the bouffanted elephant in the room: Steve’s hair. Just look it, comprehend the volume – the sheer unrelenting, unashamed volume. One part Tom Cruise, one part George Michael, and two parts Patrick Swayze, it’s achieved by Steve’s secret combo of products including Farrah Fawcett spray.

While that’s pure fiction, of course, the style is a real-world marvel – at once both ludicrous and sexy, and suits both formal and and casual. In fact, he’s not the only Stranger Things character promoting the “more is more” philosophy when it comes to hair. Look at Dustin’s brilliant mop of curls, and Billy’s spectacular barnet, which is as much a mane as it is a mullet.

Brands Are Bringing Retro Style Into This Dimension

Fortunately, you don’t have to travel to the Upside Down to get your hands on some sweet Stranger Things style. Brands have been jumping on-board the demonic ride into an evil parallel universe by releasing ace collaborations based on the series. H&M has released a range of Stranger Things summer wear, Louis Vuitton showcased a Stranger Things print on the catwalk, Levi’s have a selection of graphic tees, and has lined up a “Hawkins High School” collection of retro-flavoured sneakers. These Are the Best Black Friday Deals on Fitness and Wellness Products
19 Pickleball Gifts to Help Your Favorite Player Eat, Dink, and Be Merry
Peloton Instructors Love These Products So Much, They’re Gifting Them to Everyone
This Indoor Smart Garden Became a Part of My Self-Care Practice
Alessandro Michele Is Exiting Gucci