Harvey Specter. For those in the know, it’s a name that conjures up a knowing nod of agreement among men and women alike: goddamn, that guy looks good in a suit.

If you’ve seen any of the high-stakes legal drama, Suits, (the clue is in the title; and yes, it’s the one that starred the Royal Family’s newest member), you’ll be familiar with the lead character’s oft-referenced, efficacious persona and swaggering good looks. Harvey Specter is the James Bond of the small-screen courtroom. He’s Don Draper for the Netflix era, and his witty one-liners are Instagram catnip for Monday morning motivational memes. “Sorry I can’t hear you over the sound of how awesome I am”.

When Harvey Specter walks into a room, he exudes authority and people listen; he wears the best suits because his suits are his uniform – his superhero cape, if you will – and are all a reminder of what exceptional, well-fitted tailoring can do for a man.

We all know that uniforms are aesthetically alluring. ‘All the nice girls love a sailor’, as the old military singalong goes, and just ask a marine. They’ll vouch for the reputation. But, a uniform also has the desired effect of purporting a sense of heroism and power, a dedication to a higher cause.

For us metropolis-dwelling civilians, Harvey Specter included, our closest adaptation is a flawless suit. A suit tailored with military precision and worn like a uniform is the armour for any man going into battle at 9am.

It’s this uniform approach that dictates many of the style cues of Harvey Specter’s suits. There’s a distinct lack of fuss, colour or accessories in his tailoring, reflective of his no-nonsense approach to business. He has established what works for him – a cut as sharp as his tongue, and he keeps variety to a minimum, saving surprises for his unsuspecting business adversaries. And no, Harvey Specter doesn’t do business-casual. “People respond to how we’re dressed, so like it or not this is what you have to do.”

For the most part, Harvey Specter opts for a classic business suit look, a two-piece with side vents and polished details such as a sharp close cut, peak lapels and flapped pockets. His shoulders are also usually ‘roped’, meaning there’s a strong overall shape and magnificent roll of firmness in the fabric at the sleeve head, creating a powerful but contemporary silhouette, perfect for his disarming persona.

To emulate the character off-screen, buy a suit that avoids exaggerating these proportions. That’s key if you want to keep it contemporary and dodge the city-slicker power-suit vibes, made famous by the 1980s Wall Street lot. The Harvey Specter way of dressing is very much in contrast to the now-dated look of extremely-wide lapels, heavy pinstripes, braces, cutaway collars and statement socks. Of course, that look is still prevalent in certain corners of New York City and London, but it is (thankfully) becoming increasingly rare.

As for brands, Harvey Specter’s style is very much in line with that of Ralph Lauren (particularly the American giant’s Purple Label line) and early Tom Ford suits – which the character was known to wear in the show. His sunglasses too, are always simple, understated and by Tom Ford.

It’s important to compare his suit details with those of his whip-smart, young protégé, Mike Ross. A softer overall shape, notch lapels, relaxed shoulders, flatter fabrics, and a cut that’s not quite as form-fitting are all key signifiers of the quiet hierarchy and subtle differences these suits support. 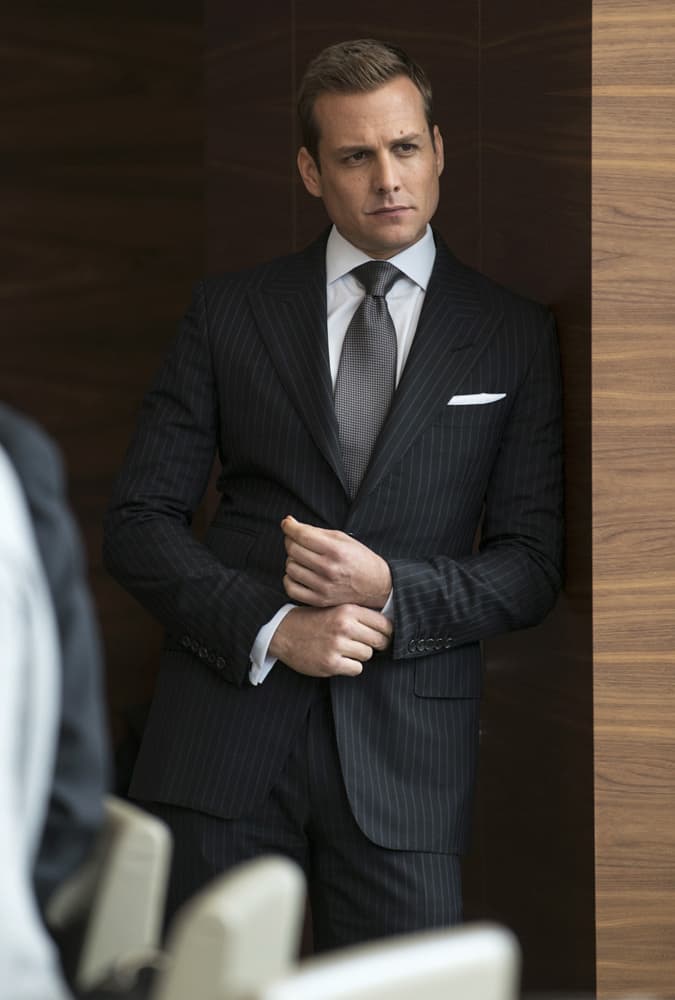 Tailoring is easily over-accessorised, so it’s refreshing to see Harvey Specter adopt, at most, a clean, elegantly folded white pocket square on the odd occasion.

He tends to take a classic approach to fabric choices, opting for dark, high-twist worsted wools or wool-blends with a touch of silk for that extra nod to luxury. If there’s any pattern at all its shark-skin or a fine wider rope stripe – there’s no sign of window-pane or country tweeds here. He takes a timeless boardroom approach to the styling and colour palette of his ensembles with a mostly plain, monochrome selection, which again ensures his uniformity and formality remains intact.

If he opts for blue, it’s an elegant navy, not a brash cobalt hue. His default shirt choice is white, with a classic collar just long and wide enough to suit his face shape, as well as barrel or subtle French cuffs with simple cufflinks. He’s also often seen in one of the all-time great tailoring combinations – that is the Cary Grant shark-grey suit with white shirt and black tie.

Do not let it be said that this is boring or safe. It takes a man who knows his look and is confident enough to be able to wear such simplicity to be able to pull it off.

But if there’s one critique of Harvey Specter’s look, it’s his tie choice: too much satin and a full Windsor knot, both of which date his look. The full Windsor shape is generally too large for most people’s collar and head size, and can cheapen the look of a tie – just ask Premier League footballers. Of course, you can see why the costume department opted for this tie knot on Specter as it serves to highlight his position as the top dog within the company. However, in the modern day, opt for a fabric with no sheen, save the silks for weddings – just your own, in fact – and a four-in-hand knot replete with a dimple is preferable. 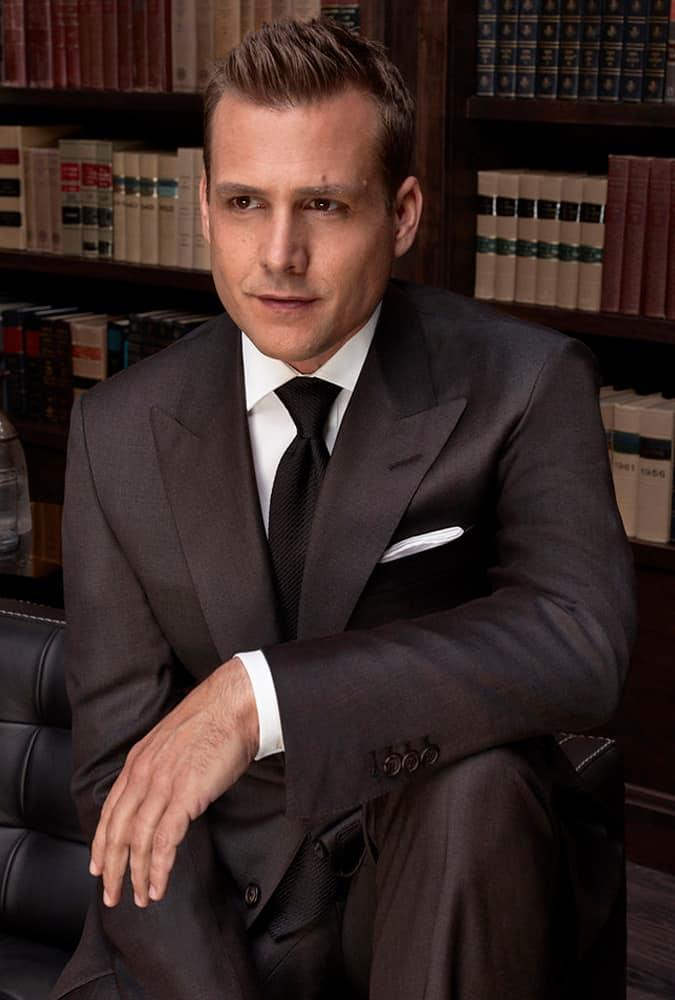 On the odd occasion Harvey Specter does throw on a three-piece, he will undoubtedly nail the look. This is thanks in no small part to his mantra of keeping an outfit simple, understated and not overcomplicating it with colour, fuss or too much styling.

A prime example of this comes in the form of a tonal combination of all-navy with a white shirt, and subtle lapel detail on the waistcoat – with the bottom button undone, of course. And when he removes his jacket and loosens the tie, he still looks pristine. 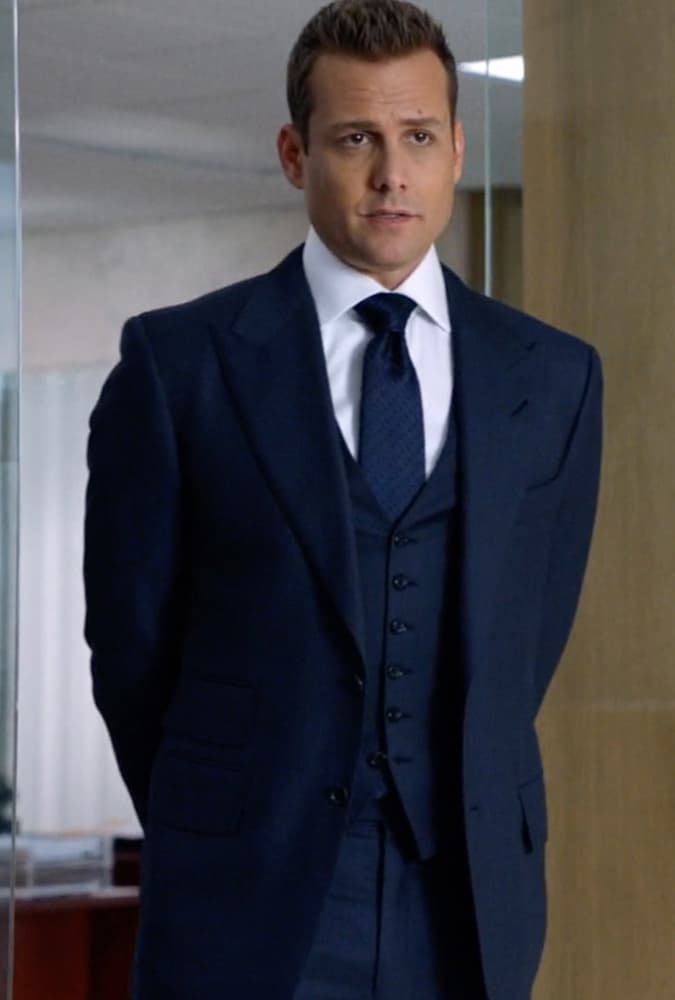 There have been a few scenes where the Suits boys have suited up to the next level and donned black tie. As always, Harvey Specter is the benchmark of impeccable evening style, and while he could have used a cummerbund to avoid the white of his shirt showing at the waist, his look is more contemporary without one.

The diamond-point bow tie is a brilliant alternative detail, which he pairs perfectly with a classic buttoned dress shirt and signature silk peak lapels – a timeless, winning combination. 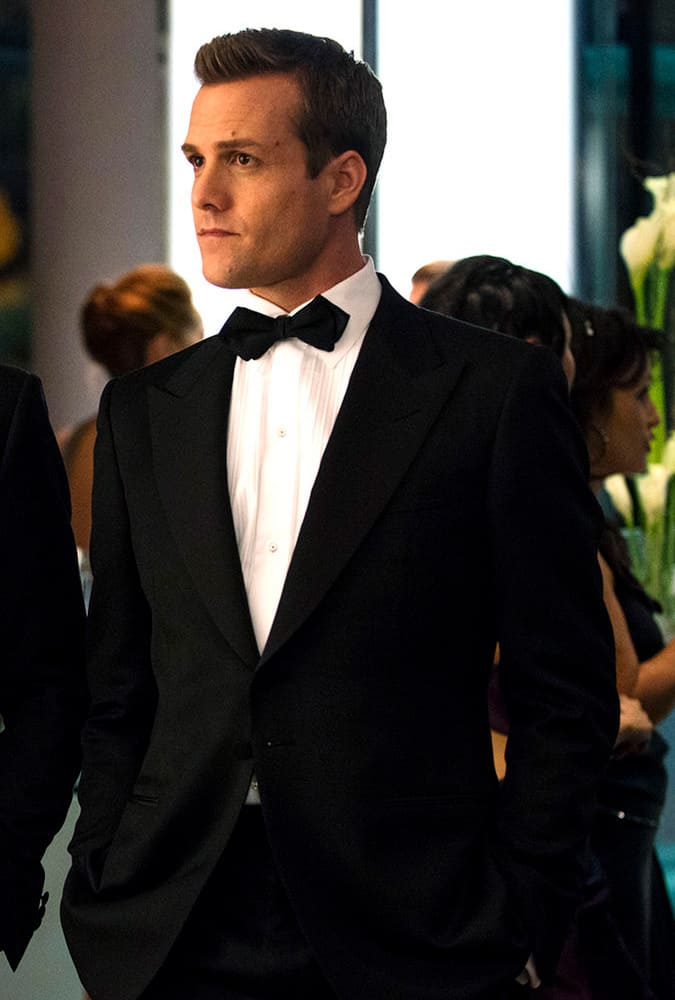 During the colder months, Harvey Specter’s layers are an extension of the great fitting suit he wears underneath. Befitting brisk New York mornings, he usually opts for a knee-length or three-quarter wool or cashmere winter coat, with peak or notch lapels in a dark navy, grey or black.

There’s a hint of styling in the form of a simple scarf worn loose or draped to follow the line of the lapel gorge, which sums up what Harvey Specter does best – keeping it classic but supremely cool.