Just two days before the release of the first three episodes of their Netflix documentary series, Harry & Meghan, Meghan Markle touched on why she spoke to Oprah about the mental health struggles she had while working as a senior royal family member and hinted in her comments why she generally believes sharing her story is worth “every second of whatever comes with it.”

For background, Meghan told Oprah in her March 2021 interview that the treatment she received from the British press and some members of the royal family and its staff led her to have suicidal thoughts during her pregnancy with her first child, Archie. “Look, I was really ashamed to say it at the time and ashamed to have to admit it, to [my husband Prince] Harry especially, because I know how much loss he’s suffered. But I knew that if I didn’t say it that I would do it—and I just didn’t want to be alive anymore. And that was a very clear and real and frightening constant thought,” she told Oprah.

“I share this because there’s so many people who are afraid to voice that they need help,” she continued. “And I know personally how hard it is to—not just hard it is but when your voice is silenced, to be told no…This was emails, begging for help, saying very specifically I am concerned for my mental welfare…Nothing was ever done. So we had to find a solution.” Meghan and Harry ultimately stepped back from their working royal family roles in January 2020.

At the Ripple of Hope Awards gala in New York City last night, Meghan told the audience why she decided to detail her experience publicly. “It wasn’t an easy decision to make, as you can imagine,” she started, via Page Six. 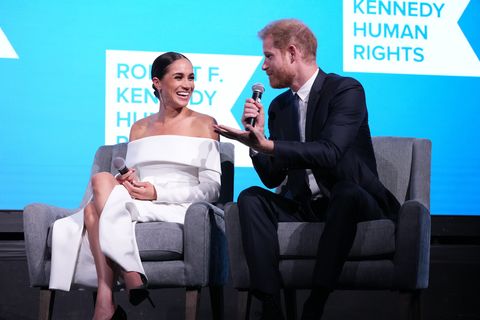 “I don’t want anyone to feel alone. And when you’ve been through anything that’s challenging, and everyone, especially in the past few years with lockdown and COVID, that spike in numbers of people having an experience they might not be voicing,” she added. “We all need to, when we can, if we feel brave enough, to just speak honestly about your own experience. It gives other people space and the courage to do the same, but more than that to really feel like you’re not alone, because I think that is often what can be the largest hindrance when you feel that way, you don’t see a way out.”

“But ultimately, if you feel like there’s someone else that has a lived experience. they’ve gotten to the other side, and gave example of resilience, an example of ‘there is a happy ending,’ I think that’s what most people are probably seeking out in those moments,” she said. “And that’s why I made the decision to just say ‘if my experience can help someone else not feel the same way or to know that there’s hope then it’s worth every second of whatever comes with it.”

If you or someone you know is at risk, you can call the National Suicide Prevention Lifeline at 988 or 1-800-273-TALK (8255) or text HOME to 741741 to message with a trained crisis counselor from the Crisis Text Line for free. You can find more resources on their site here.

All About Annie Murphy’s Husband, Menno Versteeg
Tim Blanks on the Spring 2016 Paris Men’s Shows – Style.com
When to Catch New Episodes of Harlem on Prime Video
This 15-Minute Cardio Workout Is Designed to Help You Run Faster
‘This Violent Act Was Not In Pursuit of Public Safety’: Kamala Harris Speaks Out at Tyre Nichols’ Funeral