The Sun reports that exes Kendall Jenner and Harry Styles are finding comfort in each other as they cope with their own separate breakups. Friends of Styles claimed to the outlet that he and Jenner have been “leaning on each other” for the last few weeks.

Jenner quietly broke up with her NBA player on-off boyfriend Devin Booker last month. Styles is currently “on a break” with Olivia Wilde, whom he dated for nearly two years. Jenner and Styles themselves dated back in late 2013 and early 2014. They later sparked dating rumors again when they reunited in December 2015 to go on holiday in Anguilla. They got handsy on a yacht then, but no bigger reconciliation came out of it.

The two remained friendly enough though to appear on the Late Late Show together when Styles guest hosted in December 2019. 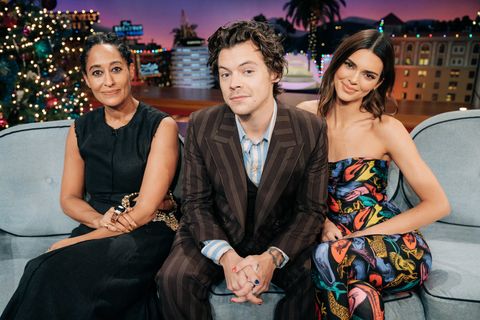 Regarding their connection now, a Los Angeles source told The Sun, “Harry and Kendall have always stayed in touch, but in light of their recent splits, they have more time for one another. And Harry has had Kendall’s ear over his break-up with Olivia.”

“Kendall is one of the few people to understand the level of fame and scrutiny which Harry endures,” the source continued. “She is also dealing with her own tough time [with her own breakup].”

Don’t expect Styles and Jenner to rebound with each other though. The outlet added that while the two are “very alike,” their busy lifestyles just wouldn’t make anything more than friendship work easily.

It’s worth noting that Styles and Jenner both ended things with their ex-partners because of schedule differences caused in part by their careers as a musician touring the world (Styles) and model occasionally traveling the world for fashion week and shoots (Jenner).

One source told People of Jenner’s breakup from Booker, “Both have incredibly busy schedules right now with their careers and they’ve decided to make that a priority. They have a lot of love and respect for each other and wish only the best.”

Another source told Entertainment Tonight regarding Styles and Wilde’s decision to go on a break, “They made the decision to call it quits a few weeks ago but they really do love spending time together. He’s gearing up for the international leg of his tour next week, so this was a fitting time to go their separate ways.”