Linda Cardellini knows that viewers aren’t ready for Dead to Me to be over, because she feels the exact same way. “We don’t really want it to end, but we want to do it in a good way,” she tells ELLE.com as the final season drops on Netflix.

When Dead to Me first hit the streamer in 2019, the dark comedy immediately found a devoted audience. In fact, the usually tightlipped Netflix revealed that an incredible 30 million subscribers watched season 1 during its first month on the platform. But just three years later, Dead to Me comes to an end with its heartbreaking but phenomenal third season.

“It’s bittersweet, because I love playing Judy,” Cardellini says. “Sometimes, when you see those tears on screen, they’re really Jen and Judy, but they’re also Linda and Christina saying goodbye to the show.” Below, Cardellini opens up about Judy’s fate, working with Christina Applegate and James Marsden, and her favorite moments from making Dead to Me.

You’ve been on such a rollercoaster journey throughout three seasons of Dead to Me. How did you feel about wrapping up Judy’s story for good?

I love that we get to wrap it up in the way that we always intended to, that [creator] Liz Feldman intended to. It’s really her. She’s just such a great crafter of story. Sometimes, for instance, on Freaks and Geeks, we wrapped it up, but we did it in a way because we knew we were going to get canceled. [Dead to Me] didn’t get canceled. It was a choice. And Liz made the choice.

“It’s hard to say goodbye…because it always feels like lightning in a bottle.”

I love Judy and Jen together. I love being with Christina on screen. I love the whole cast; James [Marsden], everybody is so great. So it’s hard to say goodbye to something like that, because it always feels like lightning in a bottle. You don’t want to let go of it, because some things are just really special.

The new season is so emotional for so many reasons, but especially for your character, Judy. Did you have any reservations about where your storyline was headed?

No, I didn’t. I love to be surprised by what Liz is going to write. I am always asking her, “What’s next?” When she thought of [Judy’s ending], she told me what was going to happen, and that’s bittersweet too. There are parts of it that you think, “Oh, well that’s quite a story.” And there’s other parts where you think, “Oh, do I really have to do that?” But I think that they crafted the story so well, because you really get to see the character sort of solve things or answer things that have been questions all along. It really puts a spotlight on their relationship. This season, more than ever, is about Jen and Judy’s friendship, and what that means, to their lives and to their futures.

How did you feel about Judy’s final scene and where we left your character?

I like it, because I think it leaves it open-ended in some ways, and we all have our own opinions of what that really means. The message of the show is grief, loss, forgiveness, and friendship, and those themes are really examined because of Judy’s ending. I think that there’s something about loss and grief, where you look back and think, “God, I could never explain this person to somebody else. They just meant so much to me, and they were so special in my life. And they were so strange.” And you could never explain those things to people who have never met them. When Judy sort of disappears from the world, you’re left with that feeling, like, “How could you ever tell somebody what this friendship was like, what this journey was like?” 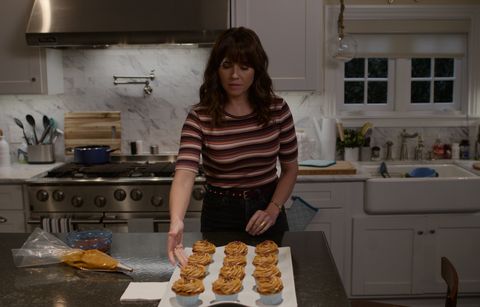 Linda Cardellini as Judy in Dead to Me season 3.

To me, it resonated with grief, because of the people that I’ve lost in my life. You go on to try to explain them to your child who’s never met them or somebody else, and you can’t quite find the words, and you can’t quite describe them. A picture doesn’t do justice, and a memory doesn’t do justice. You just had to be there with them for the ride. And that’s what I feel like it is when Judy’s not in that seat next to [Jen] anymore.

This show is really about the connection between you and Christina Applegate, and it’s so fun to watch you two together on screen. What’s it been like working so closely with her, and was it difficult to say goodbye to these characters and that onscreen friendship?

Oh, absolutely difficult. There was one point where we’re crying, and we’re thinking, “Is this even justified?” I know we’re crying because the scene could call for it. But the amount of crying that was happening was because we know we’re going to be friends forever, that’s for sure. Working with Christina, she’s so good, and she’s a fantastic actress. She’s a great friend. We were so lucky to hit it off immediately, and that friendship that we have on screen is how we are in real life too, only we’re not murdering people. And I’m very different from Judy. We’re different people than you see on screen.

That connection that we have has just been so wonderful for me. I love the work that we were able to do together and I love the time that we were able to spend together. Like I said, the friendship’s forever, but we don’t get to see each other day to day and work on stuff and create stuff. We often would sit there and just try and make each other laugh. It’s been one of the most joyous partnerships I’ve ever had on screen, and it’s really one of the most special friendships that has developed for me. I’m really grateful.

And what’s it like working with two very different James Marsdens?

Oh, he’s so good. He’s such a great guy. Everybody who worked on our show was a really wonderful person and a special, unique talent, too. James is just so incredibly talented. You’ll hear him sing. I mean, he can do anything, and he is certainly not bad to look at. He’s really got it all. To see him play both parts [twin brothers Ben and Steve], you get so used to him in each role that you forget about the other guy. There was one night where he was playing both guys in a flashback, and it was so much fun to watch him play both characters. There’s a part where somebody’s pushing him, and he was moving against himself, but there was nobody there, and he was talking to them.

He’s as nice as we think he is.

He is. And Christina and I and him, we have such a great relationship. We feel so lucky to have each other. 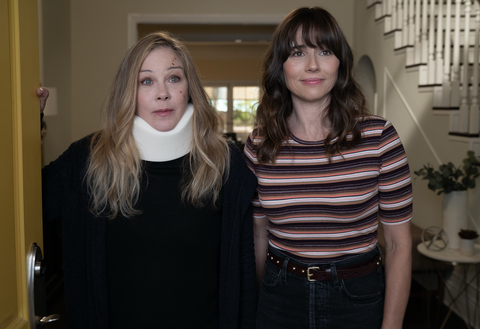 Christina Applegate as Jen and Linda Cardellini as Judy in Dead to Me season 3.

So we need another show with the three of you, basically.

I would love that.

Your character went through some really difficult things, including her fertility journey, which she faced again this season in a different way. How did you approach telling Judy’s fertility story?

Well, I know it’s very personal to some of our writers. We had lots of talks about it, and I have friends and family who have gone through similar things. Unfortunately, it’s a story that a lot of people are familiar with. I felt honored that we could do this storyline that related to so many women, and see it in a way that was different. Judy has to process that grief, and it doesn’t happen all at once. She doesn’t just process it and move on. It keeps hitting her in waves throughout the series. There’s a lot of big things that are happening in season 3, but that’s a big one for Judy as well.

Do you have any favorite memories from filming season 3 of Dead to Me?

I mean, they’re bittersweet [memories]. There’s a scene towards the end where [Christina and I are] in bed, and we’re having one of our final scenes, and of course we are very emotional. We look at each other, and we’re like, “Oh God, look at us. How silly.” Then we look, and behind the camera, everybody else was crying too. So we realized that it’s not just emotional for us. We have a giant community of people, who feel so attached to the story. That was one of those moments where you realize how lucky you are to be in that community.

“Jen and Judy are a love letter to female friendship.”

It’s been one of the greatest privileges of my professional life to be in this show, and to have been given this character, who just does so much. Every single episode, there’s just so much happening, and Judy has such a unique outlook on life. I just feel so lucky to have been given Christina as my partner and to have this female friendship on screen. Jen and Judy are a love letter to female friendship. To be able to have had that on and offscreen is really a gift. And I’m so grateful to everybody who watches the show and supports the show and supports us. I don’t know if that’s too corny, but it’s true.

It’s true. We don’t have enough shows that are just about female friendship. And it’s so important we have that.

And they’re such crazy friends! They should never be friends, and they turn out to be the most diehard friends you could ever find. I think that’s the funny thing about friendships. Us girls, we’ll do anything for our friends. We really will.

This interview has been edited for clarity and length.

Amy Mackelden is a freelance writer, editor, and disability activist. Her bylines include Harper’s BAZAAR, Nicki Swift, Cosmopolitan, Marie Claire, ELLE, The Independent, Bustle, Healthline, and HelloGiggles. She co-edited The Emma Press Anthology of Illness, and previously spent all of her money on Kylie Cosmetics.