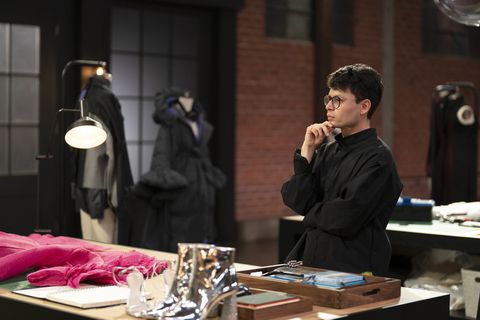 The recipe for reality competition shows can feel a bit been-there, seen-that. With lots of drama, handy editing maneuvers, and off-the-charts cattiness, it’s either a major guilty pleasure or…exhausting. Thankfully, Amazon’s Making the Cut (included with a Prime subscription) manages to skirt past all those cheap tricks while still delivering something that keeps you engaged and curious. You can root for the designers, learn a little something about fashion, and, ahem, shop.

If you’ve been flirting with the idea of watching, consider this your last push to bump it to the top of your queue. We’re halfway through the eight-episode season (the finale will drop Sept. 9). Keep scrolling for our top five reasons to watch ASAP.

It’s served up in the perfect snack-size amount.

The third season debuted earlier this month with two episodes dropping at a time, letting you get a little binge buzz while still maintaining some self-control. And while that cadence might not seem like such a big deal, it’s actually kind of perfect—and the first reason to give it a try. You can ease into watching it and immediately cue up another ep without the danger of coming to hours later and realizing you’ve spent an entire afternoon staring at a screen (we’ve all been there).

There aren’t too many competitors.

Reality shows of all ilk differ in setup, but often it feels like the kickoff is so chock-full of strange names and faces that it requires a handful of episodes to know anyone or care about their backstories. Making the Cut helps speed the getting-to-know-you process along by starting with a lean and reasonable ten. It only took half the first episode or so to feel like these people were buddies, with dreams and hopes worth getting invested in.

We’ll see if attitudes flare as the season goes along, but the first two episodes were without snark. Instead of the sort of mean, judgmental, made-for-TV commentary you might be used to, this is a safe, stylish space where people say refreshing things like, “Is it too early to admire someone’s work?” and “When you see the clothes, you see into their souls.” And should that type of camaraderie not seem all that astonishing, don’t forget one of the prizes of winning is a million dollars.

Hosts Heidi Klum and Tim Gunn are back, too. Beyond seeming like happy friends who genuinely like each other, they also aren’t inclined to be cruel or cutting in the feedback they deliver. Fashion is fun—why be mean about it?

There are some fun fashion facts to learn, too.

Okay, okay—it’s no big surprise that a design-focused reality competition might drop some knowledge on fabrics, pattern cutting, and the like. But the simple thing that’s not often discussed in the industry is the push-and-pull of art and wearability.

For the runway challenge that caps off each episode, each designer creates two looks: runway and commercial. They’re meant to be connected aesthetically with a shared viewpoint, yet where the runway is intended to be dramatic, the commercial should be easier to wear. It’s a vital framing exercise for anyone intending to make a career out of fashion design, but it’s also intriguing to see as the consumer. The pieces designers pour their hearts into and send down a fashion week runway might not be the exact item that’s produced and sold in stores—but that’s okay. And, more than okay, it’s the point of it all. 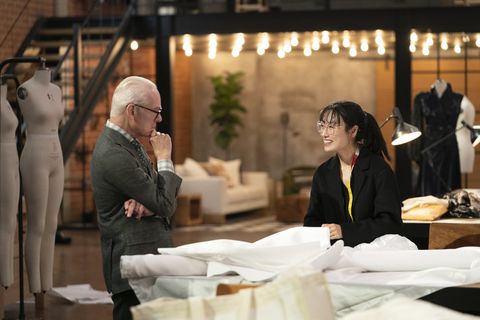 But the best part of it all might be the shopping.

One of the hooks that’s most exciting about Making the Cut is the true see-now, shop-now situation the Amazon team has set up. As soon as Klum and her fellow judges (Moschino’s Jeremy Scott and Nicole Richie) announce who’s won, you can thumb yourself right over to Amazon to shop the winning look. It’s exciting as a shopper, period, but also gives you some skin in the game. You’ll invariably find yourself rooting for the designer and collection you like the best, partly because a victory means the opportunity to add it to your own closet.

There are also additional pieces created to supplement the winning look, tapping into the aesthetic that caught the judges’ eyes while providing a few more options for us at home to buy (savvy consumerism at its best!). So, for instance, if the victorious dress from episode one is not exactly your thing, why not try a body-con version? Or perhaps the same silhouette done as a long-sleeve blouse? Choose your fighter.

Watch all available episodes of Making the Cut here.

Lululemon Is Launching a Membership Program — and It Has Some Big Fitness Names on Board
Maisie Williams Says Her Father “Indoctrinated” Her Into a “Child Cult”
Macklemore Opens Up About Sobriety: “I Choose Life Over Death”
This 1-Week Weightlifting Workout Plan Will Become Your Forever Go-To
How to Style Black Tights For Any Occasion, From the Office to the Gym