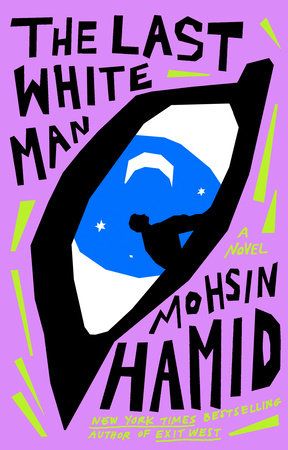 Mohsin Hamid says his fifth novel, The Last White Man (Riverhead), about a man who wakes up one morning with darker skin, has been gestating since 9/11, when he—born in Pakistan and until then educated mostly in the U.S. and employed in the U.K.—began being treated with suspicion and fear.

Now based in Lahore, the internationally bestselling author is a two-time Booker Prize finalist for 2007’s The Reluctant Fundamentalist, whose film adaptation was directed by Mira Nair and featured Kate Hudson and Riz Ahmed, and 2017’s Exit West, which is being adapted by Barack and Michelle Obama’s Higher Ground Productions and again starring Ahmed for Netflix. (The two discussed migration at the London Literature Festival). Originally called All Migrants Through Time, Exit West, about a couple transported anywhere in the world by walking through a black door, was also a Dayton Literary Peace Prize and National Book Critics Circle Award finalist, given to incoming freshmen at UC Berkeley as a summer read, and chosen by the Chicago Public Library for One Book, One Chicago.

After Princeton—where he was a student of Toni Morrison, who critiqued what would become his first novel, Moth Smoke—and Harvard law, Hamid worked as a corporate lawyer, management consultant, and chief storyteller at a creative consultancy. He reads his work aloud as part of his editing process, walks 90 minutes a day, is married to a restaurateur, and likes the Greek islands of Naxos and Santorini, the art of Shahzia Sikander, and atlases as a kid. Slip into new worlds with his recs below.

…helped me through a loss:

I left California for Pakistan at the age of nine and never lived there again, and it wasn’t until I read Joan Didion’s Slouching Towards Bethlehem 30 years later that I truly realized how much I still missed the place and how much of me was still there.

…kept me up way too late:

James Baldwin’s Another Country, which begins with probably the best writing, sentence for sentence, that I have ever read, and made me think, damn, it’s possible to do this.

Pereira Maintains by Antonio Tabucchi, an exquisitely small masterpiece of a novel, which does so much, and which too many people have not read but should.

When I was in high school in Lahore and about to go off to college in America, I read No Longer At Ease by Chinua Achebe, the story of a young Nigerian man educated in England who returns to Nigeria, and I have thought about it again and again, ever since.

…I’d gift to a new graduate:

At that age you are ready to have your mind blown and Ficciones by Jorge Luis Borges will do it.

Nabokov is very, very funny, and for me Pale Fire is his funniest.

Charlotte’s Web by E.B. White. What can I say? If you read it as a child and it didn’t break yours, you are much harder than I am.

Bapsi Sidhwa’s Ice Candy Man, which would take me to the Lahore of my grandparents, before it changed irrevocably.

The Epic of Gilgamesh. If you’re going to read literature, it makes sense to start at the beginning.

Hemingway’s A Moveable Feast, because it is.

…I would have blurbed if asked:

The hymns of Enheduanna, because she was the first named author in human history, over 4,000 years ago, and so when I called her groundbreaking, no one would have argued with me.

Haruki Murakami’s Norwegian Wood, which I gave to my wife on our second date, expecting we would not see each other again.

…I’d want signed by the author:

Beloved, by Toni Morrison, because when I was a student she caught me with a copy of Jazz, which I was devouring, and she signed it but said, “Read Beloved, it’s good,” and so I did, and, well, you don’t need me to tell you this, but: it really, really was.

Fashion Show – Rick Owens: Spring 2012 Ready-to-Wear
An Inside Look at Kylie Jenner’s Life With Travis Scott and Their Two Kids as She Turns 25
Meet Simi and Haze Khadra
8 Comfy-Chic Travel Outfit Ideas, According to Beyoncé’s Stylist
This 30-Minute Advanced Tabata Workout Will Have Your Heart Pounding