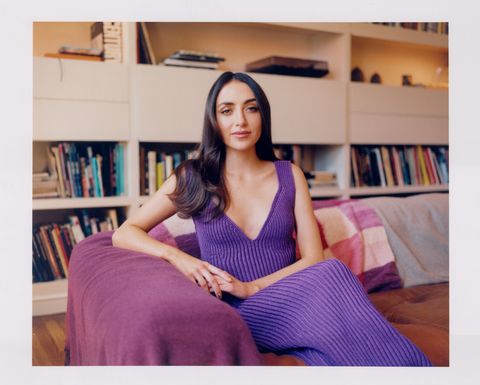 Cami Téllez of Parade, wearing a dress by Khaite.

Cami Téllez isn’t afraid of a little neon. On a recent rainy afternoon, the 24-year-old CEO and creative director opens the door to her Tribeca apartment in a silky chartreuse blouse and trousers. Parade, the irreverent underwear brand she launched with cofounder Jack DeFuria in 2019—backed by $3.5 million from venture capital investors—has a new office a few minutes’ walk away. But Téllez still frequently works from her giant circular dining-room table, surrounded by coffee-table books. One focuses on photographer Oliviero Toscani, known for his campaigns for United Colors of Benetton, while another, titled The Art of Playboy, is full of the surreal and sensual images that filled the magazine’s pages in the 1960s.

The books—and the brand they helped germinate—represent a different aesthetic universe than the one Téllez encountered while buying bras as a teenager at the local mall in New Jersey. Back then, she felt alienated by the lingerie category’s “one-note sexiness.” She saw a future for an underwear brand that recognized its shoppers were more nuanced. “I think a part of me is trying to maybe redeem the category, and redeem an inner child,” she says. “There’s a sense of, ‘How do we create product and brand moments that can be playful without necessarily sexualizing the body, while allowing for self-expression and sexuality?’”

Téllez had picked up on a cultural shift when she cut short her studies at Columbia University three years ago to launch Parade as a direct-to-consumer brand. The fashion industry was reckoning with how it uses exclusivity to sell its wares, and how it has failed to represent its audiences—both in the people it highlighted in its advertising and those it promoted behind the scenes. (A first-generation Latina, Téllez is one of the few female CEOs of color in the space.) Some lingerie brands have paid lip service to being more inclusive in their offerings, while labels like Savage X Fenty and Aerie have begun putting forward a more expansive vision. 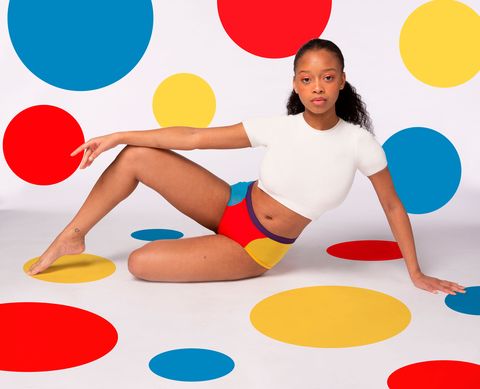 A colorful look from Parade.

Parade set out to champion self-expression and accessibility. It offered $8 thongs and $28 bralettes in recycled fabrics—released in drops with kitschy themes (ice cream, fruit salad) whose innocence contrasted with the overt sexuality of its competitors. In its campaigns, models representing a range of skin tones, body shapes, and gender identities pose in underwear in shades like Area 51 green. The brand identity is more playful than titillating, offering a reprieve from the objectification long associated with lingerie.

“The creative direction is not about selling this product or lifestyle,” Téllez says, but “creating images and new narratives that inspire people to express themselves as they really are.” Following a clever launch strategy of gifting its underwear to just about every cool Gen Zer on Instagram, it has continued to grow through sold-out collaborations with the likes of Juicy Couture. Its community now numbers over 10,000 ambassadors, or Parade Friends, who spread the word about the brand in exchange for early access to products, free samples, exclusive experiences, and the encouragement to post themselves posing in their newest skivvies on Instagram—that is, if they’re comfortable doing so. (The most involved Parade Friends, part of the label’s Gold program, are paid, too.) Parade’s community is now more than just a megaphone; the team consults with them on efforts like developing a line of nude-toned underwear.

Téllez describes the relationship with this community as “inspired co-creation” and sees it as the way of the future—not just of Parade, but the fashion industry. “It’s the step past inclusion,” she says. This collective approach was key to the development of Parade’s first “gender-expansive” collection, which launched this summer thanks to a group of Parade Friends who tested and ideated new styles including pouched boxer briefs, a playsuit, and tank tops designed to be flattering, comfortable, and supportive for people of all gender expressions.

“There are watershed brands that have redefined how brands should think, feel, act, and create,” Téllez says. “My goal is that Parade will be one of them.”

This article appears in the August 2022 issue of ELLE.

Cate Blanchett on the Female Gaze In “Carol”
ELLE’s 2022 Future of Beauty Awards
The 11 Best Walking Apps to Help You Track Your Steps, Miles, and More
25 Days of Workouts: This Fitness Advent Calendar Keeps You Sweating All Season Long
Paris Hilton’s Guide to the Best Y2K Gifts