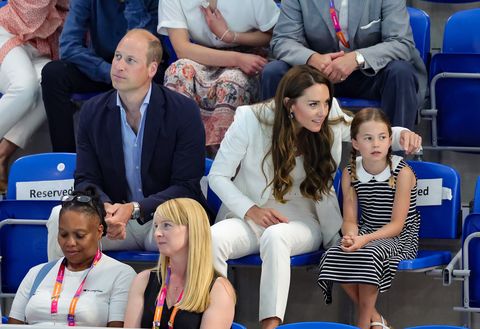 While Prince George is the royal kid who’s been making the most surprise appearances at events with his parents Kate Middleton and Prince William lately, his younger sister Princess Charlotte had her own big moment today, attending the swimming match of day 5 of the Commonwealth Games with her mom and dad.

Charlotte, 7, sat alongside her mother in a black and white striped dress with a Peter Pan collar. Kate complemented her in an all-white look: a blazer, top, belt, and high-waist pants.

The two were photographed interacting frequently during the match, giving the public a little glimpse into their private mother-daughter dynamic. Charlotte was pretty emotive at some points: 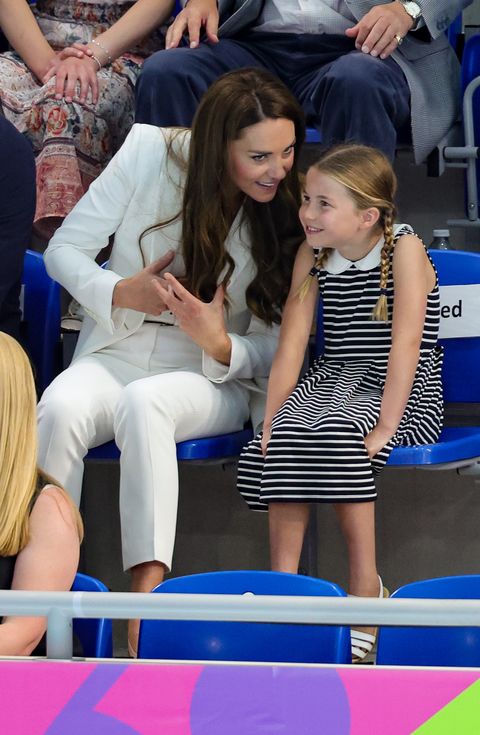 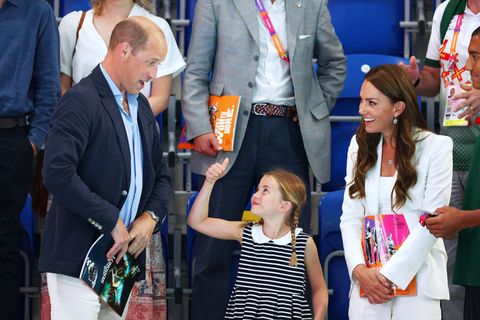 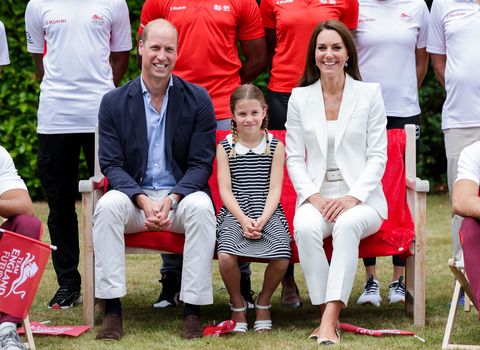 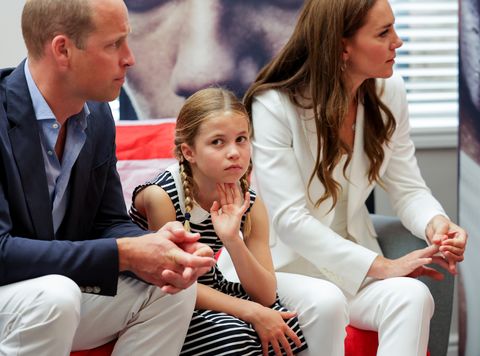 And Kate couldn’t hide her pride for her daughter later during the event either as Charlotte channeled her mother shaking hands and meeting officials: 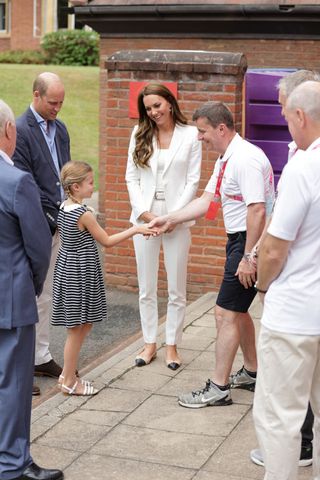 Us Weekly ran details in May about what Charlotte’s 7th birthday was like, along with how the only Cambridge daughter’s personality has really come out. Charlotte got a pony this year, every little girl’s dream come true because she is, after all, a literal princess: “The gift Charlotte wanted more than anything was a pony,” Us‘s source said. “She has been taking horse riding lessons for over a year and is obsessed. William and Kate know that her passion for riding isn’t a [phase] and finally agreed to buy her one.”

Charlotte loves spotlight, the source added: “She’s such a popular little girl and loved every minute of being center of attention. It’s obvious from being around Charlotte that she possesses all the personality traits to excel in her future role. … Being in the public eye comes naturally to her–she rarely feels intimidated or complains about it. It’s something she really enjoys.”

Charlotte is also a good student: “She’s a hard worker and right up at the top of her classes in most subjects,” the source said. Charlotte is “self-motivated and a delight [to those around her.] One of her biggest passions is language. She’s already well ahead of schedule and dipping in and out of a number of languages, though Spanish is her favorite.”

Annie Murphy on Why Birth Control Options Matter Now More Than Ever
An Inside Look at Kylie Jenner’s Life With Travis Scott and Their Two Kids as She Turns 25
Issey Miyake Brought the Avant-Garde Down to Earth
Fashion Show – Rick Owens: Spring 2012 Ready-to-Wear
Julia Fox Has Been Wearing Merrell Clogs All Summer, and They’re on Sale Right Now