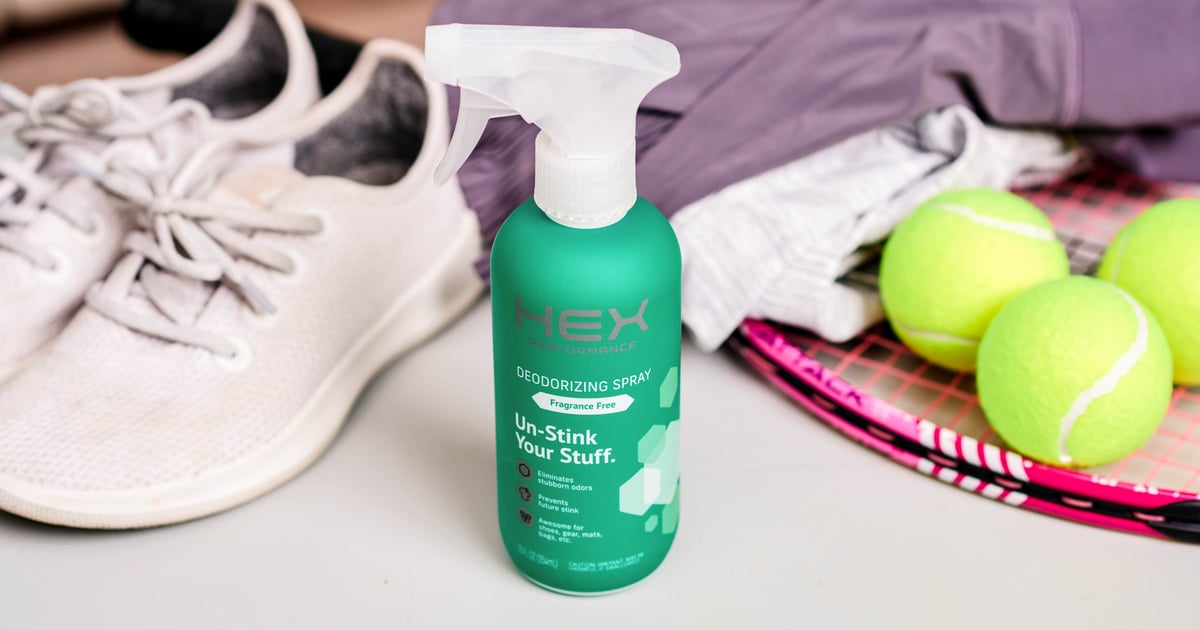 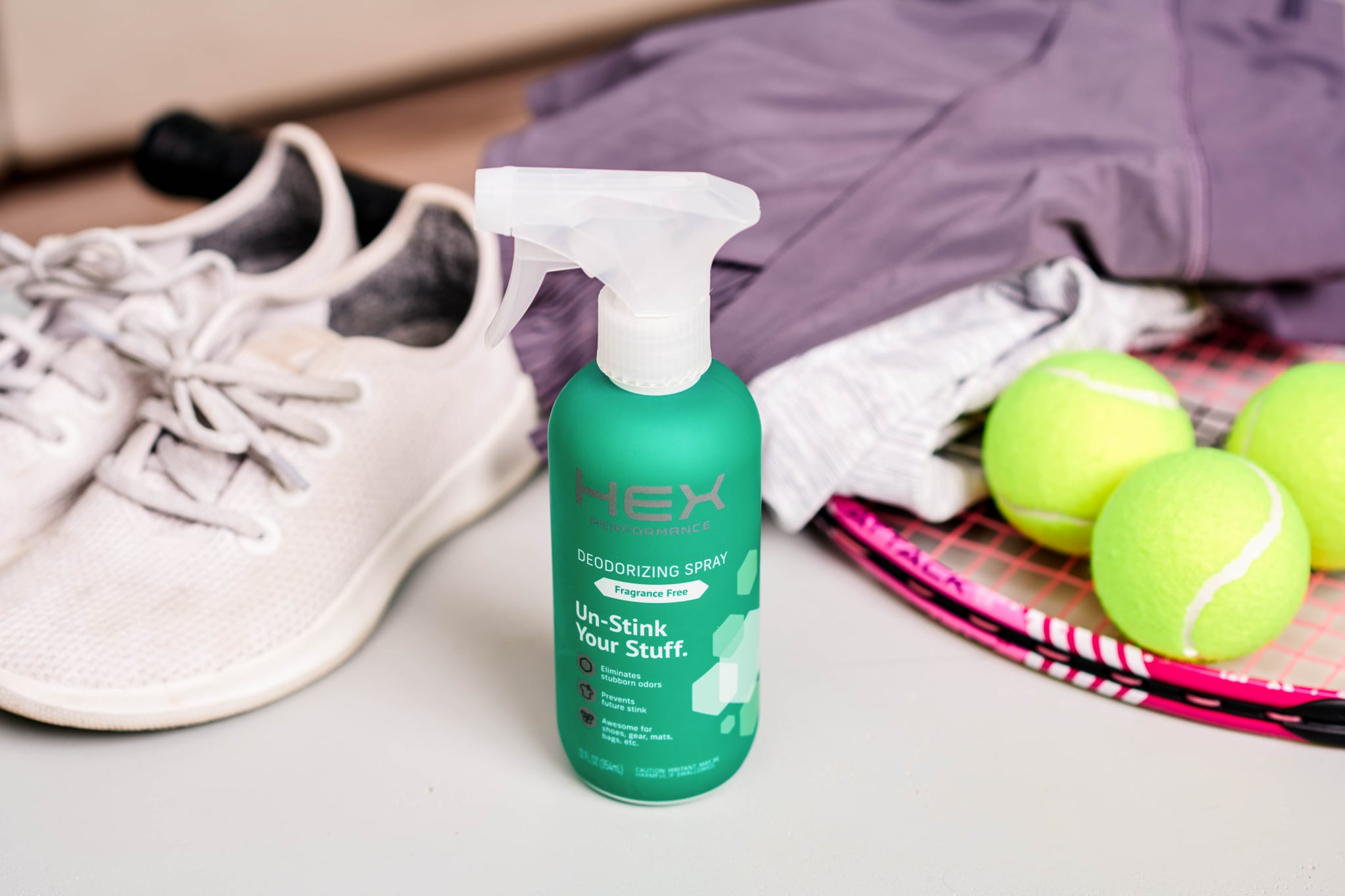 Between taking dance classes, doing workouts, and teaching yoga, let’s just say I sweat a lot. I go through so many workout clothes during the week that, oftentimes, I have to wash them multiple times in order to get the body odor (BO) out — especially my sports bras. And though I’m lucky enough to have a laundry room in the basement of my building, it makes doing the laundry a real chore since I have to drag my laundry basket there and back when it gets full. I also don’t have a lot of room to hang-dry my bras either, so sometimes, because they’re hung so close to each other, they end up smelling musty and I have to rewash them anyway.

All that to say, when Hex offered me the opportunity to try its new Hex Deodorizing Spray ($10), I quickly said yes. And, since I have eczema, I opted for the fragrance-free version of the spray to spare my skin of any potential flare-ups.

But for those of you who aren’t familiar with the product, allow me to explain what exactly it is. While it may sound like a deodorant, it’s not something you put on your body directly. Instead, you spray it on smelly clothes, a yoga mat, shoes, and gym bags to “eliminate the stubborn odor.” Per the spray’s instructions, it’s as easy as shaking the bottle, holding it six inches away from whatever you’re trying to spray, lightly spraying the entire surface, and then letting the item dry. The product page notes that you can use this spray “on anything you can fit in your washing machine,” but I wanted to try it specifically on my sports bras. With such simple instructions, I gave it a try — here’s how it went.

How Does Hex Deodorizing Spray Work?

You know that moment when you’ve pulled your favorite sports bra out of the closet to throw on, but you give it a quick sniff test and you quickly realize that your BO is more powerful than your laundry detergent? Well, Hex is the product that you’d spray on your activewear when this is the case. The brand’s line of products are meant to get into the tightly woven threads of “performance fabrics,” per Hex’s “science” page, and completely eliminate the smell.

The Hex Deodorizing spray claims to both eliminate odors and “prevent future stink,” with its Hex molecule-powered formula. Here’s how the formula works: the odor-causing bacteria that attaches to our sweat is anionic, meaning it has negatively charged ions, per the National Library of Medicine. “The HEX Molecule gives our formulas a positive charge, so it actively attracts and attaches to bacteria, truly pulling the muck out of your clothes,” the brand’s site states.

“The theory is that the positively charged immune peptides are attracted to the negatively charged membranes of the bacteria. Destabilizing the membrane leads to bacterial cell death,” dermatologist and textile expert Erum N. Ilyas, MD, says. “Sweat itself does not initially have an odor. Odor develops as a result of bacteria acting on the sweat. By treating or addressing the bacteria, a reduction of odor should be noted,” Dr. Ilyas explains.

One morning, I searched through a rack of sports bras I washed the night before and found one I wanted to wear. After giving it a sniff, I noticed that it was still, indeed, musty, so I grabbed the Hex spray, spritzed the spray all over the bra, and waited a few minutes for it to dry, per the instructions. Once it was dry, I then gave it another sniff, and although the pungent odor had diminished, I could still smell a bit of the BO of it on the bra when I gave it a close sniff. So I put it away in my laundry basket and opted for a different bra that smelled better.

I didn’t want to give up on the spray though, so I tried an approach that was different from the original instructions. On my next laundry day, I gave that same very smelly sports bra another spray, let it dry for a few minutes, and threw it in the wash with my usual detergent. And guess what? It worked! After a wash and hang-dry, my sports bra smelled like, well, a bra! Even after another sweat session, a week in the laundry basket, and a wash, my bra still smelled BO free without another round of Hex spray.

If you don’t want to take my word for it, consider taking a look at the reviews. One reviewer on Amazon tried a similar prewash method to mine and had comparable results: “I like to smoke cigars every rare occasion, but I hate the lingering smell,” the reviewer wrote. “After spraying with this 20 minutes before a wash it is perfect, no residual smells, and it doesn’t try and mask it with another scent, it just eliminates it.” We love to see it.

So even though I took a different approach from the original instructions, in my opinion, Hex Deodorizing Spray delivered on its promise to remove and resist odors. In other words, this spray is staying with my usual laundry supplies for good.

Selena Gomez and Dr. Jill Biden Sit Down to Discuss Mental Health
‘This Cannot Happen Again’: How One Mom Found Purpose After Losing Her Daughter to COVID-19
The Beauty of Mental Wellness
Fashion Show – Paris Highlights: Spring 2012 Ready-to-Wear
Blake Lively Says She’s “Never Felt More Myself” Since Having Her Daughters